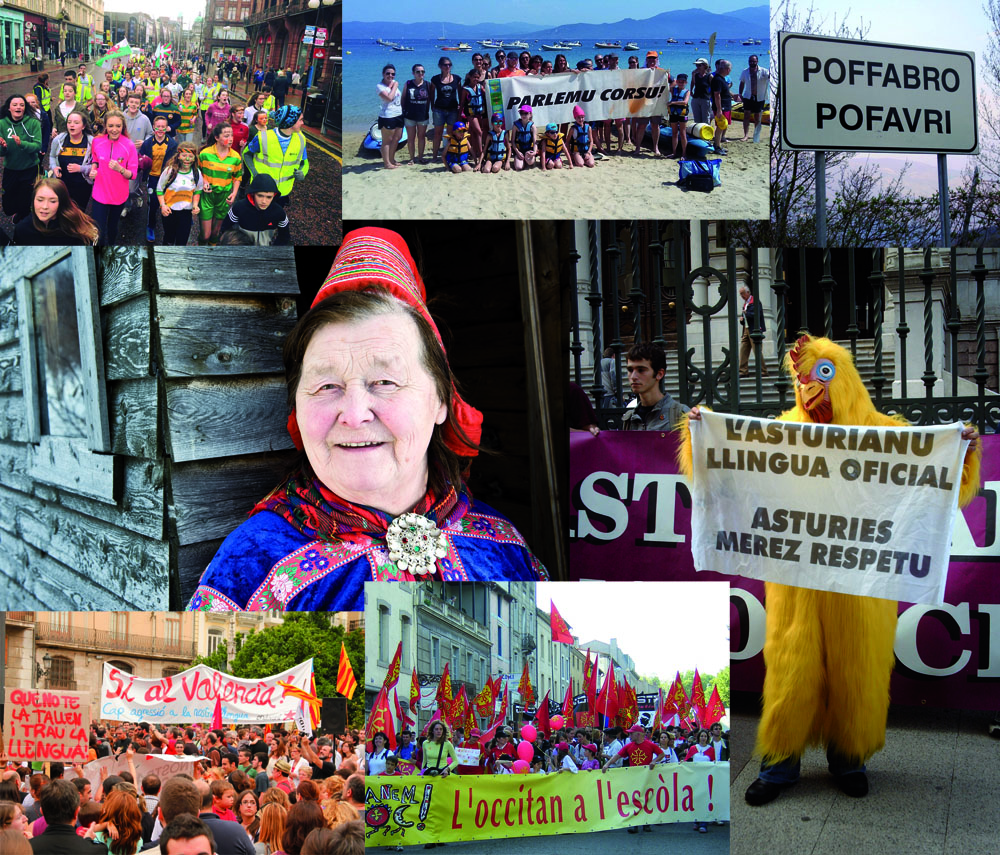 Basque cultural activists have created language speakers, areas and tools, and have also spoken out in favour of the language. They know what language rights being violated means, and they know by heart the measures which have to be taken in order to defend language rights. Stakeholders in other minority languages in Europe face similar situations. Due to that, there are two promoters behind the protocol (Donostia 2016 European Capital of Culture and Kontseilua), and an organizational group (Linguapax, the European Centre for Minority Issues, PEN Translation and Language Rights Committee, the Unrepresented People and Nations' Institution, the European Language Equality Network and CIEMEN) and a scientific committee; but the basis for the protocol has been laid down by more than 200 European stakeholders.

What is the protocol for?

Language movements have put forward more than 400 measures for protecting rights. Measures and indicators are two of the protocol's key words. Here are a couple of examples to explain what they mean.

We have the right to be able to read in our own language literature written in other languages. So some measures must be taken in order to protect that right. Let us imagine that we take a measure which leads to 50 books being translated into Basque over the next five years. We must then know whether the measure is carried out or not and, to do that, two indicators must be closely followed: who is responsible for the deadlines and measures decided on being carried out (local organizations, provincial governments…)

Television is another example. One measure could be asking for one television channel being kept for minority languages. It is easy to see whether that measure is carried out or not, and whether there is a station in Corsican or not. A further measure – additional to asking for a whole channel – would be introducing the criteria of Corsican being heard on other channels; for instance, allowing Corsican speakers to use their language even on French channels. Who is responsible for minority languages being on television channels? In what time-scale, and to what percentage, must Corsican be present? Those questions must be answered.

Notebook is another key word. Each language community and each stakeholder will have its own notebook. The protocol is not the same for everybody. There are around 150-180 measures which are valid for all. However, nine million people speak Catalonian and it is the official language in many speakers' home areas.  Catalonian is not in the same situation as Occitan (580,000 speakers), Frisian (400,000 speakers) or Aragonese (12,000 speakers). Catalonian probably carries out 90% of the measures in the protocol, and in several other languages 90% may well not have been carried out.

Which is why a notebook is needed. Each language community or stakeholder must ask itself which of its rights are being violated, what type of measures it wants to take, the time-scale it is going to use and who it will ask to take on responsibilities.

Donostia Basque cultural activists, for instance, may have their own notebook: What should the city council of Donostia do in order to carry out the protocol? The city council can do this, that and the other. It would be the stakeholders' work to define right and establish time-scales.

The protocol is a great opportunity for communities with very few speakers. They always have to defend their language, and saying that "It's not just us, there are millions of speakers behind this request" is very valuable for them

In the Basque Country more than 100 social stakeholders have been involved with the protocol. Many of them have taken part in work on different sectors: eduction, public administration, socio-economics, culture/the media and proper nouns (place names and personal names).

The following language communities have not put forward measures, but are ready to support the protocol: Voro, Udmurt, Erzya, Kashubian, Aragonese, Tatar (in Estonia), Tatar (in the Crimea), Aromanian, Hungarian (in Transylvania), Danish (in Germany) and German (in Denmark).

The organizing group will meet on 25th October and present a final version of the protocol. Having fixed the measures, social stakeholders will be asked to state their support. There will not be enough time to get in touch with stakeholders all over Europe before the December meeting, but the challenge, at least, is for all minority languages communities to be identified.

The acts held on 15th, 16th and 17th December will seem something like the end of the process. During the first two days, the European Language Diversity Forum will be held in Donostia, and experts and people who work in the area will come together. On the 17th, Donostia 2016 and Kontseilua will present the protocol.

The three-day event will only seem to be an ending: in fact, the protocol project will continue. Some type of structure will be set up in order to give the protocol vital energy.

From then on, work will continue with the objective of getting European popular movements to express their support and, beyond Europe, too, there will be an effort to achieve resonance internationally. The protocol will be sent to the most important international organizations, including the Council of Europe, the UN and the Organization for Security and Co-operation in Europe. The aim is to meet with institutions and well-known people in order to gain their support for the protocol. In the opinion of Paul Bilbao, the general secretary of Kontseilua, "I think it will be easier to achieve with people than with institutions, and having godfathers and godmothers will be important".

While some people are looking for support, the social stakeholders will be starting on their notebooks. Each one will be able to do its own homework.

That will involve a considerable amount of work.

"The protocol has not be drawn up by public institutions, it comes from below"

Marcos Maceira is the chair of A mesa pola language normalisation platform. The platform was set up in 1986 and has a total of 4,000 members from all walks of life. Its objective is the normalisation of Galician. Promoting the protocol measures directed connected with Kontseilua.

What do you think of Donostia 2016's invitation?

Santiago was the European Capital of Culture in 2000 and language was hardly mentioned. Donostia's legacy in this area is going to be important. Social stakeholders' contributions are absolutely necessary and Kontseilua and Donostia 2016 are making that possible for us.

The protocol hasn't been drawn up by states but by social movements.

We don't have any public support. In fact, the government of Galicia is aggressive towards us and other stakeholders who support Galician. For us, taking part in the Donostia initiative is an act of acceptance, for us and for all the other movements in Europe which defend languages.

We have long denounced the fact that the Universal Declaration of Linguistic Rights is not being carried out, and the protocol is the beginning of addressing that. This protocol is different, it is not limited to the scientific area and has not be drawn up by public institutions, it comes from below. In Galicia social movement is important, in all senses, and wants to carry out the protocol.

Will you be at the event in Donostia in December?

Yes. We're completely unprotected, our government does not fulfil its obligations. We want to protocol like this, and we need it so that we can live in our language in the same way that people live in German in Berlin.

“It has to be valid formaking direct demands to public institutions”

Leire Txakartegi, in charge of Basque at ELA

Are you happy with the work done?

We think the participation methodology is appropriate. Kontseilua met with us and we had the chance to work on the issue in our Basque committee. We're very grateful for each stakeholder's particular contribution.

What type of contribution has ELA made?

We tried to be very specific, in particular to guarantee workers' language rights at the workplace.  In the public area, in public administration, for instance in public health, we have made specific contributions and, in the private area and internally, we have contributed through the contracts we grant. For instance, in collective negotiations we have spoken in favour of the normalisation of Basque as a work tool.

Can you please tell us about some of your contributions?

Creating a specific dictionary for using companies' terminology in a standard way; requesting resources in order for workers to obtain the knowledge they need in order to work using minority languages; workers having the opportunity to receive and fill in documentation in two languages; signs in Basque; setting up Basque committees. In public administration: fixing criteria and timetables for languages qualifications; in public health, valuing the knowledge and use of professional development using minority languages.

What is the purpose of the protocol?

"We would like a hegemonic language stakeholder to support the protocol"

What is a protocol?

I'm going to tell you about the exercise I do with social stakeholders when I give presentations in different places. I tell the listeners, "When I mention the word 'protocol', which city comes to mind?" And normally people say Kyoto. And then I ask, "What subject comes to mind when I say 'Kyoto Protocol'?" and they say, "The environment". The next step: "and when I say 'Kyoto-protocol-environment', what do you think of?" And people say that governments should make a commitment and carry it out. It would be different in a legal sense, but in general what does 'protocol' mean? A protocol explains how an internationally accepted agreement should be carried out. We took the 1996 Barcelona Universal Declaration of Linguistic Rights and drew up its protocol. That declaration mentions several rights and we put forward the measures which should be taken in order to fulfil them.

You have worked with social stakeholders who have taken part in the protocol. What was the process like?

At first, they were highly respectful towards the proposal. I had sent them our report before meeting up with them, and then they said to me: "We have read the report and we don't know how to make a contribution". But we did a little exercise and then they said "Oh, is that it? We can do that!"  We have received more than 400 contributions.

You've said that many of the proposals put forward by the social stakeholders were very similar.

They've come from different places, but they're very similar. About the media, for instance, that's very clear. They mentioned media licenses, and criteria about television channels, for instance, speakers of minority languages having the possibility of broadcasting on hegemonic language channels. Setting up a language quota for media which receive public money we mentioned by more than one stakeholder.

Is the protocol particularly valuable for very small language communities?

I remember the representatives from Cornwall: Cornish is much weaker than Basque. For them the protocol is a great opportunity. They always have to defend their language, and saying that "It's not just us, there are millions of speakers behind this request" is very valuable for them. There are very few of them, they receive very little help and, recently, the United Kingdom cut off the money for their schools.

Will any representatives of hegemonic languages support the protocol?

Unfortunately, they'll all be from minority language communities. We would prefer a social stakeholder from a hegemonic language to support it, saying that "This is the way to protect language rights, to achieve coexistence".

Are you going to try to get that support?

Yes, but it seems difficult in our immediate surroundings, in the Spanish and French states.

[This article was translated by 11itzulpen; you can see the original in Basque here.] 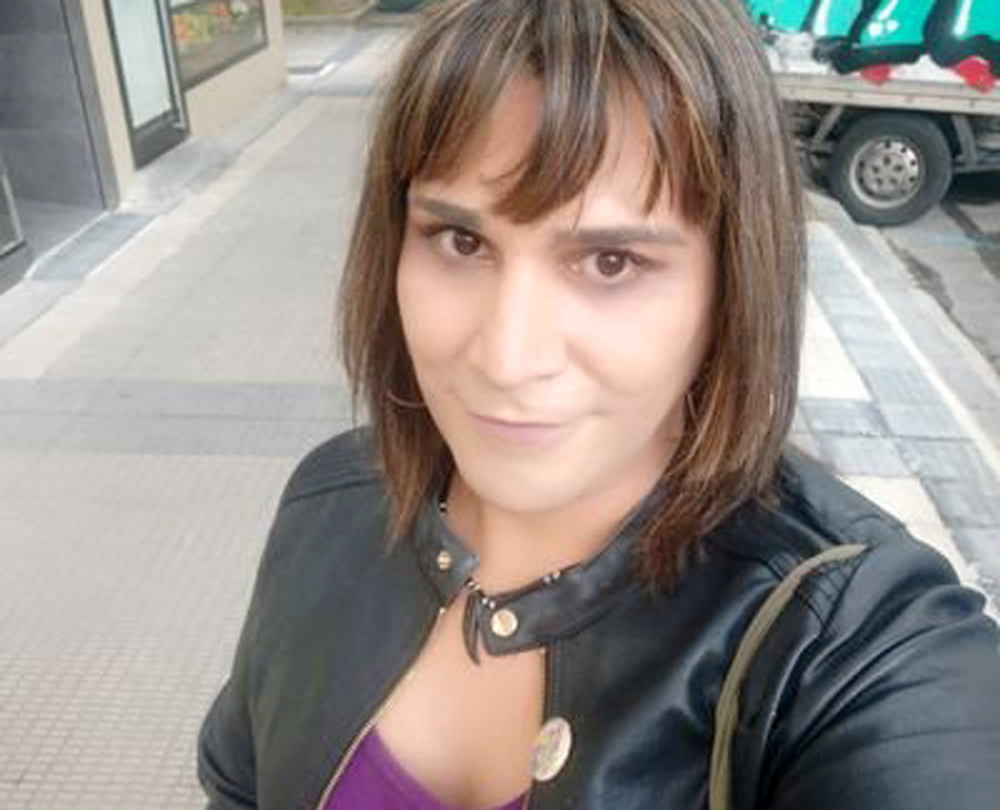 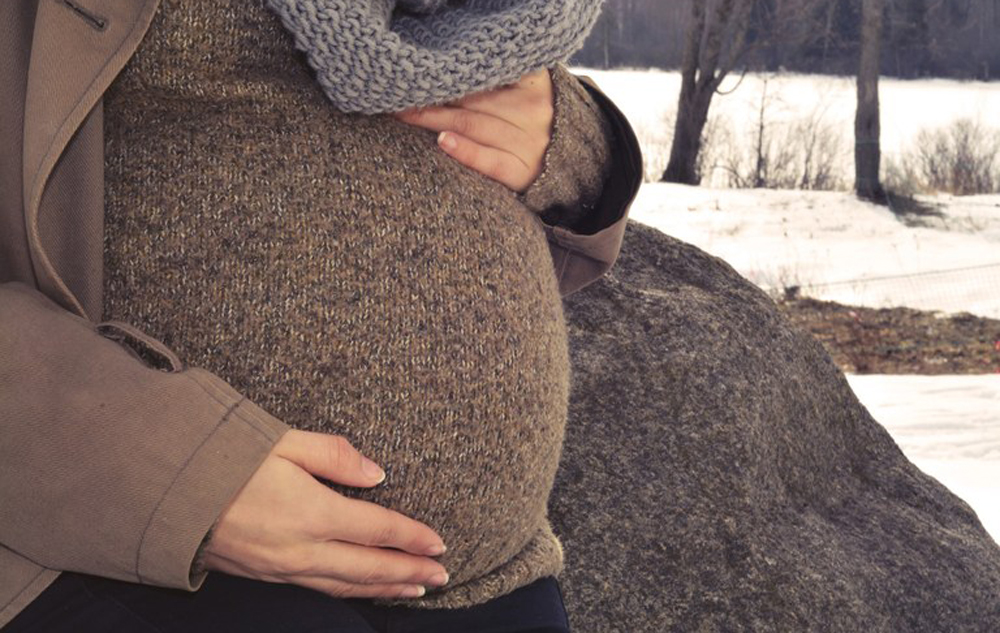 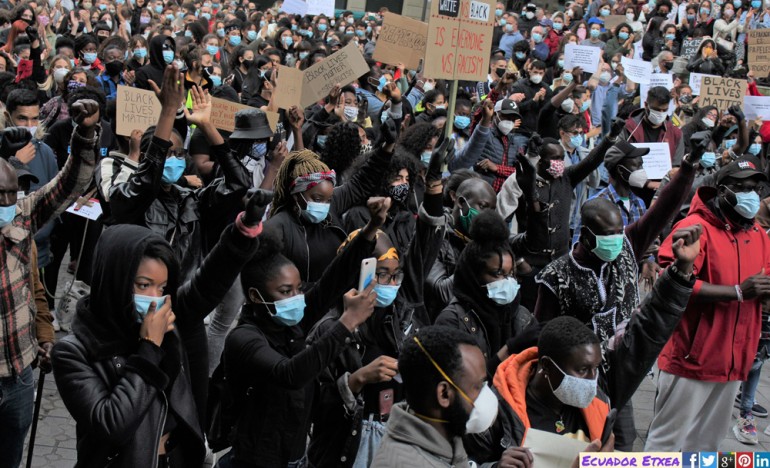 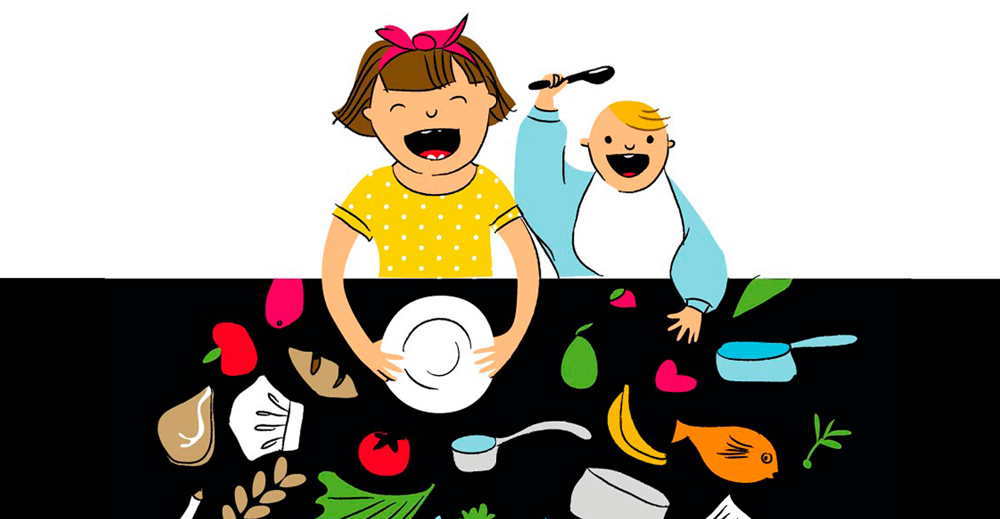 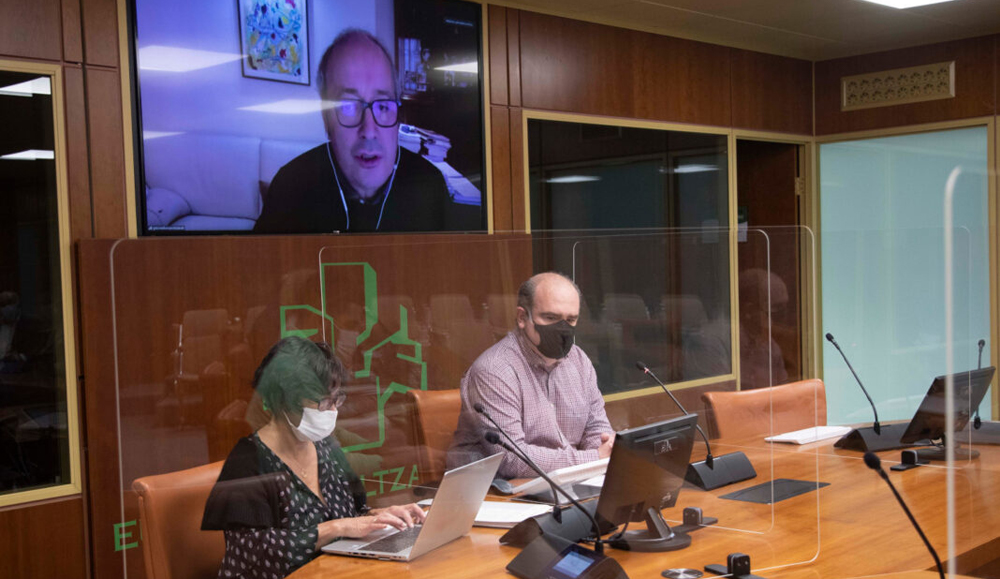 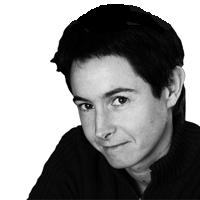